Origin of Name:   The Russian Toy is a very small breed of dog originally bred in Russia from the English Toy Terrier. 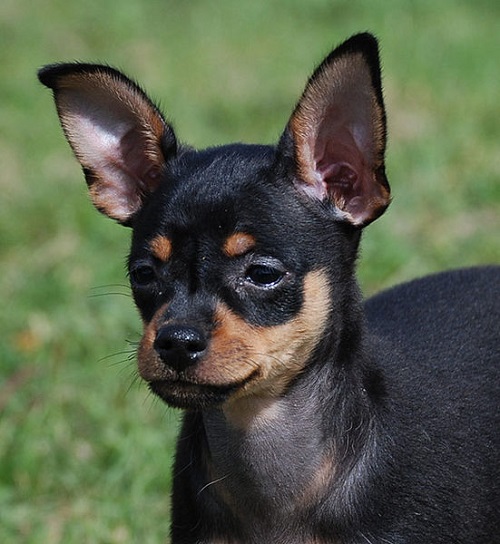 The Russian toy is a toy breed with a lineage that dates back to the Russian aristocracy. In general, he is a good-natured imp who loves to run and play. They will run through the house or yard chasing toys for as long as you can, while many others are willing to do nothing more than have fun in your lap all day long, knowing that They are the jewels of rewards in your home. They thrive on human companionship and will tell you if they are feeling neglected. Their coat is either semi-long or smooth. The long-haired variety has a good ruff on the chest and has unique feathers on the extremities, tail, and ears. Long-coated Russian toys will not have an adult coat until it is more than a year old and full fringing by the age of three. The smooth-coated variety is smooth and smooth to the touch. There is also a slight attitude difference between the two varieties. Smooth coats are slightly more terrier-like than long coats. However, the two share a larger-than-life personality

The history of Russian toys began with English stock and in the early 18th century when the English toy terrier came to Russia. Evidence of this can be seen at the Zoological Museum in St. Petersburg, where a small black and tan terrier preserved specimen from 1716–1725 is on display. The specimen stands about 14 on the withering people with the inscription: ""The dog of the sleek haired terrier breed named Lisetta, was personally of Peter the Great.""

During the 18th century in Russia, it became popular to import English toy terriers. Socialites loved these dogs because of their small size and lively nature. Appearing in public with a well-behaved little terrier at social events and operas became quite stylish. The Toy Terrier became a ""living assistant"" of sorts for the upper class people.

The Russian Revolution of 1917 almost ended the Russian toy. Breeding of dogs for companionship was prohibited and the fate of the Russian toy was uncertain. After Stalin's death, a concentrated effort was made in several regions of the Soviet Union, including Moscow, Leningrad, Sverdlovsk and Irkutsk, to restore Russian toys to prominence. Whether a mutation or the inclusion of other unknown small breeds in different lines, a unique puppy was born in 1958. This son of a pair of smooth-coated parents became the foundation of a modern day long coat (called a Moscow long-haired toy). Terrier in the early years). The first official standard for two breed varieties was written in 1966. In the 1980s, a new breed standard announced that the Moscow Long Hair Toy Terrier and the Russian Toy Terrier are actually two varieties of the same breed. In 2006, in addition to the Russian toy in the FCI list of recognized breeds, the ""Terrier"" was removed from the breed's name and is now called the Russian Toy, with both long and smooth coat varieties.

This breed is a low sheddar, they are apartment friendly and kid friendly

The long-haired variety requires more grooming than the smooth-coated variety for obvious reasons. The long coat has 1-3 long body hair. His ears are covered with thick, long hair that forms a fringe, and his limbs have distinct wings on the backside. The long-haired variety should be brushed two to three times per week and the fringe should be kept free of debris. Monthly baths with high quality shampoo and conditioner are usually enough to keep the coat healthy.

Smooth-coated Russian toys have short, near-perfect, shiny hair without an undercoat or fringe. Regular weekly brushing with a soft brush is recommended as well as occasional bathing so that the smooth layer remains free of dead hair and scaly skin. A daily shammy wipe-down also adds shine to the coat.

Generally, Russian toys agree and are eager to please, allowing them to be trained a lot. However, they are still terriers at heart, can be stubborn, and will try to become owners. His clown-like antics and outgoing friendly personality made him a great candidate for agility and trick-dog competition.

Russian toys are considered to be of medium high energy. They require regular exercise, but due to their small size, a regular yard or long run is usually sufficient. They like to go on a walk with their humans and like to run and play until they fall on your lap for a long time.

Since smaller dogs have a more delicate neck and trachea than larger dogs, it is recommended that a leash is attached to the harness instead of a collar when walking your Russian toy. It is also recommended that you do not leave a collar or harness on your dandruff while in your home. Sometimes the collar or harness can get stuck on things around the house and can injure your little ones.

The Russian toy should perform well on high quality dog ​​food, whether commercially manufactured (with a very small kibble) or prepared at home with the supervision and approval of your vet. Any diet should be appropriate for the age of the dog (puppy, adult, or senior). Some dogs are at risk of being overweight, so watch your dog's calorie consumption and weight levels. Treatment training can be an important aid, but giving too much can lead to obesity. Know which human foods are safe for dogs and which are not. Contact your vet if you have any concerns about your dog's weight or diet. Clean, fresh water must be available at all times.

The Russian toy is an overall healthy breed; Like many toy breeds, their primary health concern is their teeth. Most puppies do not lose all their deciduous (puppy) teeth and require surgical removal of the remaining deciduous teeth by the age of nine months. Periodontal disease, the manufacture of tooth tartar, can begin at the age of one year. Regular dental care such as brushing teeth can reduce plaque and prevent surgical dental cleaning or teeth removal.

Responsible breeders should examine their stock for health conditions such as progressive retinal atrophy (PRA) and patellar laxation, and owners should be aware of the risk of eye injuries, such as ulcers.