Origin of Name:   The Tosa is a breed of dog of Japanese origin that is considered rare. 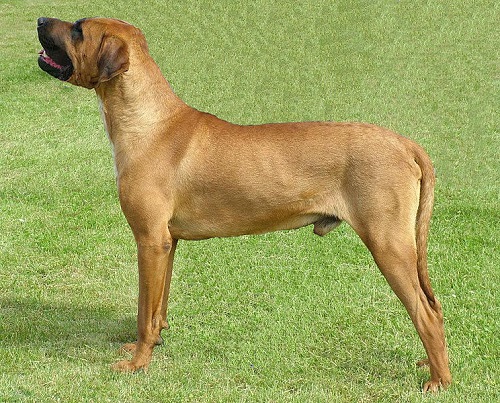 Tosa is quietly affectionate with her family, but may be somewhat isolated with strangers. This breed is, by nature, also alert to other dogs and may react aggressively to dogs that consider it to be an intruder. Excessive aggressive behavior towards humans is not characteristic of the breed. Their short, thick coat may be fawn, red, apricot, black or halter and may also have white marks on their chest and feet. In addition, the tosa matures slowly and individual dogs cannot reach their prime until they are four years old. This breed is the largest of all Japanese dog breeds. They are also known as Tosa Kane, Tosa Dog, Tosa Token, Tosa Inu, Japanese Fighting Dog and Japanese Mastiff.

There is a long history of dog fighting in Japan, which began in the 14th century. On Shikoku Island, Shikoku Inu was unequaled in Japanese dogfighting arenas before the arrival of western countries. Shortly after Commodore Perry's arrival in Japan in 1858, Japanese dog fans and dogfighters began acquiring exotic dogs with their original stock. The Tosa breed was produced as a hybrid of Shikoku-ken and Western breeds, when European and Western traders brought their Mastiff-type fighting dogs with them.

Indigenous to Tosa Province (now Kochi Prefecture) on Shikoku, Tosa was named after the region where they were born and is sometimes called the Japanese Mastiff, because of their extreme courage in the war zone of Japan and Known for strong athletic abilities. The western dogs used to create the breed were Bulldog (1872), Mastiff (1874), German Pointers (1876) and Great Dane (1924), all of which were used to improve the breed by sequential mating . According to some accounts, St. Bernards and the Bull Terrier were also included, but it is not known in which years they were used. The established characteristics of the endurance of the Tosa and the fighting instinct usually found in the Mastiff can be attributed to the participation of such breeds.

In Japan, Tosa is the dog's equivalent of sumo wrestlers and is treated with great respect and ceremony. In the United States, Tosa Kane serves as a Companion Dog and housekeeper.

The Tosa is a huge dog that carries itself with dignity in the manner of the Great Dane used in its development. It has a strong, broad skull with heavy temporal muscle, and a pronounced hindquarters leading to a powerful, square snout. The jaws and teeth are very well developed, and it is important that the breed has no signs of a complete scissor bite. The ears are quite small and slender, and hang close to the side of the face, where they are held high. The eyes are dark brown, fairly small, and usually give a calm expression.

Each part of the tosa is heavy-muscled, and it is particularly pronounced in the neck, having a broad muscular arch, and a dewlap of redundant skin, which is useful to the dog when fighting, so that it can be turned on. Its attacker even while being held. The high withers lead to a broad, straight back and waist, and even the base of the tail is richly muscular. The chest is moderately well raised, and deep, allowing the abdomen to percolate sharply.

The limbs are well angular, allowing for athleticism and maximum return on muscular effort. The breed has strong, heavy bonds and tight paws with well-developed pads. The Tosa has a short coat of hard, coarse hair. Several colors are commonly seen:

This breed requires minimal grooming and they are great watchdogs

This breed is not famous for its trainability, they are prone to allergies and health issues

The small, thick coat of Tosa requires a little grooming, and occasional brushing will suffice. Also, occasional bathing will keep them clean and they look their best. Their strong, fast-growing nails should be cut regularly with a nail clipper or grinder to avoid overgrowth, splits, and cracks. The ears should be examined regularly to avoid the formation of wax and debris, which may result in infection. The teeth should be brushed regularly.

Tosa responds best to positive-reinforcement training methods because of its inherent desire to please its owner.

Tosa is, by nature, a quiet breed, although low-energy breeds also require some exercise to maintain a healthy weight and to achieve mental stimulation. Exercise options may include run time in the backyard, preferably fencing, or be taken for a walk. Exercise can also come in the form of indoor activities such as chasing a ball rolling on the floor or learning new tricks. Some outdoor activities such as hiking or retrieving balls can also provide a good outlet for energy expenditure. Training for dog sports such as agility, obedience and rally can also be a great way to give your dog exercise.

Tosa should perform well on high quality dog ​​food, whether it is commercially manufactured or prepared at home with the supervision and approval of your vet. Any diet should be appropriate for the age of the dog (puppy, adult, or senior). Some dogs are at risk of being overweight, so watch your dog's calorie consumption and weight levels. Treatment training can be an important aid, but giving too much can lead to obesity. Know which human foods are safe for dogs and which are not. Contact your vet if you have any concerns about your dog's weight or diet. Clean, fresh water must be available at all times.

Some dogs may face health challenges in their lives, but most Tosa are healthy dogs. Working with a responsible breeder, prospective owners can obtain the education necessary to learn about specific health concerns within the breed.