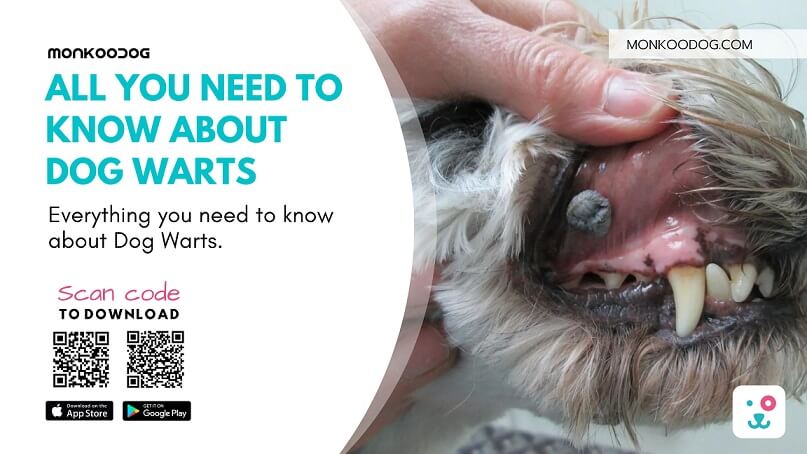 Home » Get to Know About Warts, a Must for Dog Owners.

Get to Know About Warts, a Must for Dog Owners.

Warts are relatively common on dogs, but they aren’t usually a  threat to your dog’s health, despite their appearance. While human warts commonly appear on the hands and feet, dog warts are viruses-causing lumps, most commonly appearing on the lips or within the mouth in dogs, however, they can appear anywhere on the dog’s body.

One or more lumps, often shaped like a piece of cauliflower, will be visible. Some warts have a little “stalk” connecting them to the skin.

Warts are most common in puppies under the age of two, as their immune systems aren’t yet developed enough to resist the virus.

Unless the wart becomes irritated and breaks open, or if it grows into the skin, it gets removed.

There are few noticeable indications of these unsightly viruses, like if the benign skin grows and irritates or breaks open or if they extend into the dog’s feet.

Even so, any skin growth on your pet might be concerning, and if you’re not sure what it is or if you know it’s a wart, but it becomes inflamed or infected, you should seek veterinarian help. Here’s all you need to know about dog warts.

What Exactly Are Warts?

Papillomas are the medical term for warts. These non-cancerous skin growths are a result of papillomavirus strains infection.

This virus comes in a variety of forms, each of which targets a specific animal species, such as dogs, cats, horses, and humans.

Canine papillomavirus type 1 (CPV-1) is the virus that most usually causes warts in dogs. CPV-1 infects dogs but not humans or other pets.

Other sorts of skin lump on dogs’ bodies can be mistaken for warts, such as sebaceous gland tumours, moles, or skin tags.

These growths on the skin might be benign or cancerous. A veterinarian consultation is important to check all forms of skin growth so that they can be appropriately diagnosed and treated.

Symptoms observed for Dog Warts are

They begin as a rough patch of pink-to-white skin that becomes darker and lumpy as it develops, resembling cauliflower.

Skin warts can appear on

It’s possible that your dog simply has one wart or that several warts have erupted on his body. Dog warts can be

Although the wart may appear to have a little stalk, many of them connect to the skin directly.

What is the size and colour of warts?

How are warts transmitted?

The incubation period for CPV-1 might last up to two months before any symptoms show. Dog warts virus infects the dog’s cells, causing them to multiply faster than usual while inhibiting genes that would reduce cell growth. When warts first develop, they generally grow fast for many weeks.

Warts mainly spread through touch in the form of

Virus entry points are as follows:

Warts nearly often affect dogs under the age of two because older dogs’ immune systems have matured enough to fight off the virus before it creates symptoms.

Older dogs with weakened immune systems, on the other hand, are prone to developing warts. Tick, flea, and mosquito bites can potentially serve as viral entry points.

How to Diagnose Warts?

Some of the Prevention Strategies for Warts are:-