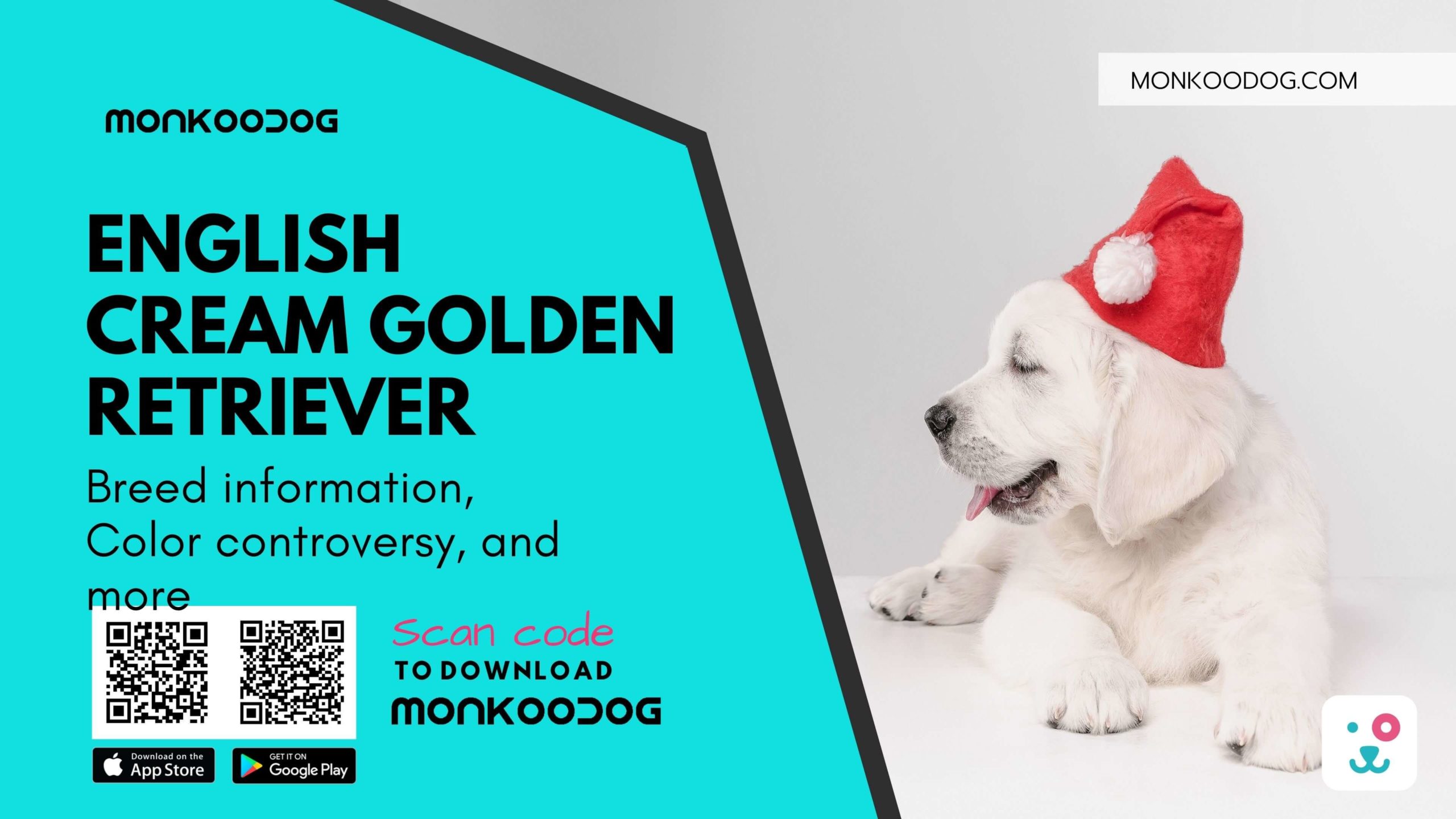 Golden Retrievers are one of the most common and adored dog breeds of all times. They are cute, they are lively, they are active and  they are playful; what more would you look for in a dog? They are a complete package. There are various types of Golden Retrievers with a difference other than simply the colour of their coats; one of which is the English Cream Golden Retrievers. Since they have not been recognised by the Kennel club as Golden Retrievers they are often confused as a separate breed but that is not really the case.

English Cream Golden Retrievers are a popular option for pet owners. They have a kind and friendly attitude towards people they have never seen before.

Cream Retrievers are less aggressive toward strangers than American Golden Retrievers due to their calm demeanour. They are a  lot of fun, and they like to play outdoors. When they are not working out, they have to keep their body and mind busy. And, that they do by playing a lot of games. Wonderful outdoors and physical activity are just part of their life.

Be ready to teach them the command “drop” fast, since this is a mouthy breed. Because they’re so kind even while they’re playing, it’s a blessing. Dog owners have invented an “egg challenge” to measure the softness of their Golden Retrievers. No matter how long he chews on it, a Golden Retriever will not break an egg. Please attempt this fun exercise outdoors.

In addition to all of the above, if you’re looking for a cute and obedient dog, the English Cream Golden Retrievers are a great option. They are turning out to be excellent therapy dogs because of their calm demeanour and ease in training.

In addition to being bigger and more muscular, they have a larger skull. These animals have a bigger neck to support the weight. As a result, they have a stronger jaw since their muscles are somewhat bigger. The closer their eyes are to each other, the more rounded they seem to be. Their ears are in level with their eyes, in contrast to the higher ears of American Goldens.

English Cream Golden Retrievers are generally found between the shades of cream to light golden. Since commonly the English creams retrievers are also not cream but more in the golden side; the cream ones are more expensive, because of their higher demand in the market. Their coat falls to the height of medium long length and is found to be more dense around the ears, neck and tail. The English Cream Golden Retriever ‘s coat is super soft and silky and a little on the wavy side.

The Golden Retrievers are supposedly a very active breed and cannot do without exercise. Be prepared to devote one hour of your day playing, training or exercising with your dog. They are considered therapeutic dogs for a reason as they need more family time and in general time around and with people. If not exercising, engage them in other indoor fun activities as, like most of the dogs, they can also get depressed because of separation anxiety if not paid attention to for too long.

Be a part of positive reinforcement training which is rewarding good behaviour with more playtime or treats or food that your pet likes. This would encourage them to be more cordial or playful whatever side of them you like more and would like to see more of.

This is also a very ingenious way of training as dogs like to pick up very quickly on what behaviour is being rewarded and what is not.

Now, this would just be racist. This is not true. If any dog is healthy that is an attribute to their owner and not the breed of the dog. All Golden Retrievers maintain the same health but that is highly dependent on the owner and whether or not they are taking good care of their dogs.

Again, this might come as a surprise to the owners of English Cream Golden retrievers who bought them under the illusion that these are rare species or breed, they are not. They are just as common as any other Golden Retriever of any colour. This is just one of the many tactics that are employed to sell more of these Cream Golden Retrievers at a much higher price than is generally asked for them.

There is a very widespread misconception that English Cream coloured Golden Retrievers are superior breed or better than the rest of the Golden retrievers but that is not true as they are just of a different colour and nothing more or nothing less. These are just market tactics to sell them at a higher price.

Pets, like humans, have to undergo a lot, but in a more helpless way as they cannot talk and express the pain they are feeling or undergoing so you have to constantly be on the lookout for any kinds of signs and symptoms that they might show. Below are some of the most common diseases that are found in retrievers

This is the most common health issue found in mostly all dogs and is not specific to English Cream Golden Retrievers. This problem mostly surfaces with age when leg and elbow joints do not join properly and start causing pain due to friction over time.

Due to the excessive thick undercoat of Golden Retrievers, it ends up becoming a very ideal place for many bacterias to grow and mutate. This might lead to severe inconvenience to your dog as these bacteria might put them on the way to n-number of allergic skin reactions . Their thick fur can also be a lace for ticks, mites as well as other small parasites to thrive on.

This can only be prevented by regular grooming and combing your dog’s hair. Do not get lazy here and comb their hair without fail every day. Also, Golden Retrievers are more prone to skin diseases so visiting a vet twice a year is not a bad idea. Always  remember, precaution is better than cure.

Out of the many heart diseases found commonly in dogs,Dilated Cardiomyopathy(DCM)  is the one that is found generally in retrievers. In this disease, the heart becomes elongated, thinner and weaker hereby risking the lives of your retrievers. This is a very recent observation and not much is known about it so consult your veterinarian regarding this. Another heart problem that can be seen in many retrievers is Subvalvular Aortic Stenosis(SAS) which causes thinning of the blood vessels that carry oxygenated blood. Due to the thinning of the blood vessels, the heart has to pump more blood in shorter intervals thereby working more than before which can have serious repercussions later on.

Cancer rate is very high among Golden Retrievers when compared to other breeds of the same health and size. The highest growing form of cancer is Hemangiosarcoma. It can be easily detected in its early stages considering you are taking your retriever for regular check ups. The best you can do for your dogs in cases of cancer is frequent checkups. As all cancer can be detected in their early stages which would make the chances of surviving and curing much much higher than if detected later on.

Golden Retrievers are also prone to many ear and eye infections which can be detected by various physical signs and would not go unnoticed.

Whatever may be the health problem, it can all be solved by when detected early for which it is necessary not to miss the signs of unusual activity like prolonged lethargy, inactivity or refusal to participate in activities they previously liked to indulge in. Annual veterinary check ups are a must if not more than once.

Before getting an English Cream or any Golden Retriever, make sure you read about them. How to take care of them as it could be a bigger responsibility. They are kids that never grow up and will constantly need your love and attention. If you are not going to give them enough time then you will be causing them sadness. That is Separation anxiety which will make them less sociable and inactive. Getting a pet is supremely rewarding and challenging at the same time.

English Cream Golden Retrievers are the perfect pets to go for. They will return your love and attention twice of what they receive. So make sure you take good care of them, groom them properly and play with them. Lastly, do not treat any other dog less nicely because of their colour. Because at the end of the day they are all pets, and they are all worthy of our love.

PrevPreviousA to Z of the cutest royal breed: Teacup Pomeranian
NextTips for Organising Your Dog SuppliesNext