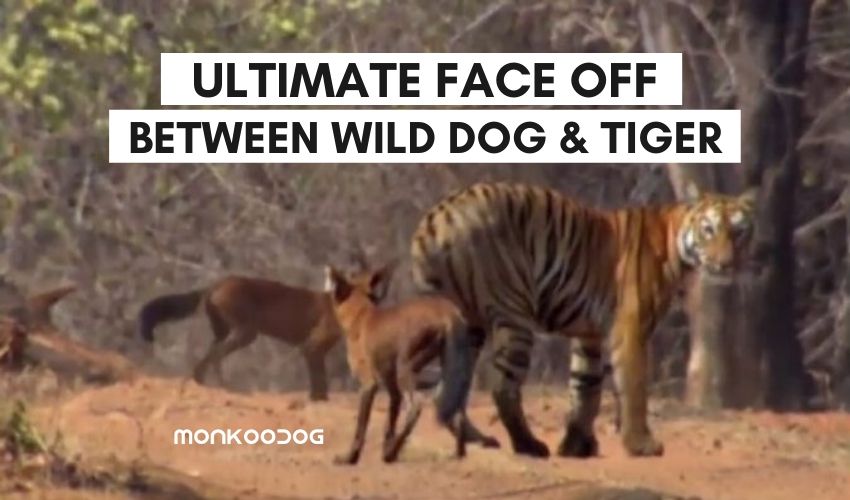 Home » Wild Dog Had An Ultimate Face-off With the Tiger, Leaves Internet Surprised

Wild Dog Had An Ultimate Face-off With the Tiger, Leaves Internet Surprised

The one great positive aspect of the global lockdown post the Covid19 pandemic has been the revival of mother nature. Flora and fauna have been flourishing due to the drastically decreased man-made pollutants all around.

Footages of numerous wild animals walking on the streets of cities and towns have been posted on various social media circles almost every day. Many endangered and even though to be extinct animals have been seen coming out from the dense forest interiors.

The Nilgiris of Southern part of India is home to numerous wild animals that are protected under the various National Parks like Kabini, Nagarhole, Madhumalaietc. From Tigers to Wild Black Bears, Fox, Bison, Jaguar, Leopards, etc, there are many such animals that freely roam around in these National Parks.

One of the anti-poaching surveillance cameras in Kabini caught a very strange yet heart touching instance. The recording showed a wild dog sending out a frantic warning of tiger approaching residential territory in South India to alert the public.

Dhole, a breed of India wild dogs are known for their exclusive and very unique vocal calls for communication. Though they are wild dogs, they have been known to be very friendly towards humans, unlike dingos.

Tiger Chasing a Dhole aka Wild dog at Kabini. Never ever heard or seen d alarm call of Dhole in forests as they themselves r predators.But this Tiger made him to run for his life. What a peculiar sound. Amazing.
Video credit in video@SudhaRamenIFS @ParveenKaswan @susantananda3 pic.twitter.com/3U5LT0SVwV

The footage shows the tiger approaching the wild dog along the border of the Kabini forest. However, instead of running away, the Dhole surprisingly holds himself in an alert position and begins to give out repeated warning calls.

The strangest fact is that Tiger is a stronger and more vicious predator, but instead of attacking, it turned around and runs away as soon as the Dhole begins to give out a warning call. Indian Forest Service official Susanta Nandy who posted the video said, this was one of the most strange behavior he had ever seen from a tiger.

Many people have been admiring the dog for saving the lives of numerous people who stay in close vicinity of the area where the incident actually occurred. The tweet has garnered over 30,000 views and retweeted over a thousand times already.