All you need to know about an American Hairless Terrier 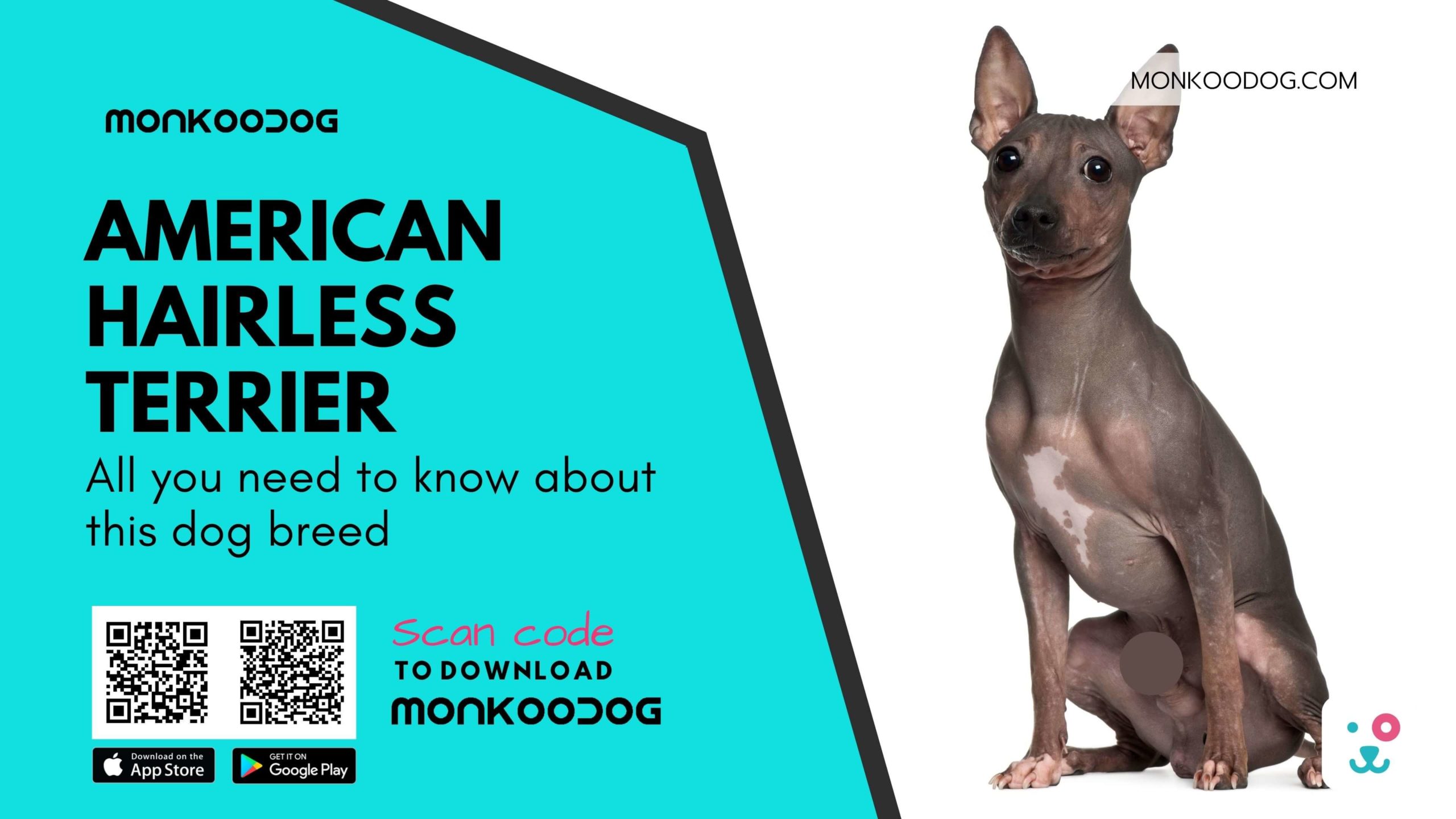 With the growing incidents of allergies with dog fur, dog lovers are rushing to get hypoallergenic dogs to cure their Canophilia. It is in this context that the shiny American Hairless Terrier is getting wildly popular. However, hairlessness is not the only trait of this breed. They are a full package of entertainment and silliness.

An American Hairless Terrier is in every way a terrier with a big personality in a little body and a lot of love to offer. The playful and intelligent dogs of this hairless breed fill up the environment with their energy.

The American Hairless Terrier is a hairless breed that developed from ratting dogs. They first emerged in a litter of Rat Terriers in the 1970s and the hairless breed development took place in the decade following. Though Terriers as a breed are quite old.

When the American Hairless Terrier was first found in the litter of a Rat terrier due to a gene mutation, that is when the breeders began the breeding of a new hairless breed.

Though the evidence of the Hairless Terriers have been found earlier too, it was the first time the breeding of the breed as a separate breed was taken up after a decade of efforts.

The Rat terriers gave birth to a hairless terrier due to a natural gene mutation. The gene is a recessive one and that is why they were rarely born naturally and a different breed developed with the breeding of hairless terriers only.

In 2014 only, the American Hairless Terriers got recognition as a different independent breed.

‘Hairless’ got attached to its name due to the specific type of hairless coats they possess.

With a solid or white coloured skin with a spotted or saddled colouring, American Hairless Terriers have a sort of uniformity in their looks. When they are born, they have soft and pigmented hair but they start disappearing and completely disappear by 8 weeks.

The breed also has a coated variety of dogs that is called Coated American Hairless Terriers. The coated varieties are allowed to maintain diversity in the breed.

Neither are they too light, nor too heavy. Their bodies are quite proportionate. With a curious look and expressive eyes, they are alert and active dogs who have their ears erect most of the time.

The tail has a slight curve and they hold it erect. Their skins are very smooth with different colour combinations. The coated AHTs variety has a full coat with all other descriptions similar. Due to their hairless body, they were never suitable as hunting dogs though they are quite alert and possess hunting instincts.

With a very playful and energetic temperament, this dog breed is very stubborn. Though they never worked in hunting activities, the inherent prey drive of the terriers reflects in their nature as well.

Also See:- Shih Tzu: Everything You Need To Know

Their nature is very affectionate and they are perfect cuddle dogs. Though you have to get past their boundless energy first that always wants to play. Also, they require enough exercise every day to prevent destructive behaviour and excessive barking that may happen because of excessive energy levels.

Are They Good with Children?

While terriers have a reputation of not being friendly around kids, American Hairless Terriers behave quite well around kids. Though they require children to respect their personal space. That is why small children are not a very suitable company for them.

They are not perfect companions of toddlers and very small children but with training and socialisation, they learn to adjust. Early age training decides what kind of behaviour they will adopt as they grow up.

American Hairless Terriers are friendly with other pets of the household. However, the battle of supremacy of alpha titles may go on for some time, they become settled after a few days.

Their playful nature though permits them to live with cats, they often chase them around for fun. Cute, no? Also, their prey driven nature does not allow them to make up with the small animals like rats, hamsters and mice.

AHTs are alert dogs who are always on the watch with their ears erect. It is common to hear them announce a visitor with bark all the time. However, once they know there is no danger, they get friendly with the visitor and would lick them affectionately.

As much as they like to be protective, American Hairless Terriers are not suitable guard dogs. They are too small to play any effective role in that department.

If given enough time to exercise and play outdoors, American Hairless Terriers may adjust very well in apartment premises too. You just need to provide them with means to burn energy to prevent their destructive behaviour and excess barking.

Though their favourite time is what they spend outdoors. The propensity to sunburn proves they are not to spend too much time outdoors. They require sunscreen or suitable clothing to prevent that. Jackets in winters are a must for them due to their inability to prevent chill.

You need to take care of fencing the area they stay in due to their wanderlust. They need leashes when going out as they are very prone to distraction. You might also consider providing them with some area to dig so that they don’t go searching for it outside.

All the terriers have plenty of stamina and the American Hairless Terrier to does not disappoint in the stamina department. They might run continuously up to 5 miles with proper nutrition and training.

AHTs are perfect hikers. They can hike for a whole day on not so tough terrain with sunscreen on and water available. Also, rest breaks.

A half-cup to a full cup of high-quality dog food divided into two meals every day is a generally recommended diet for an American Hairless Terrier. Even though they are not extremely protective of their food, children should refrain from touching a dog’s food when they are eating.

Can They Stay Home Alone?

American Hairless Terriers can tolerate 4-6 hours of alone time every day. Though they get destructive due to attention and exercise deprivation for a long time. Crate training helps them feel secure and not get destructive while you’re not home.

The advantage with an American Hairless Terrier is that being hairless, they do not require brushing. Though their skin is prone to sunburn. That makes sunscreen an essential part of their everyday life. A vet recommended sunscreen as a mandatory addition to their grooming.

They require a bath like a normal dog, once a month, with a gentle soap or shampoo due to their sensitive hairless skin to prevent irritation. AHTs require regular nail trimming to avoid nail breaking or scratching themselves.

American Hairless Terriers are quite sensitive about someone touching their paws. That requires you to start their grooming at a very early age.

Being a healthy breed in general, they may be prone to some of the specific health issues found in AHTs. Those issues might be Hip dysplasia, Patellar luxation, allergies and some skin issues. Also common in AHTs are Epilepsy, Dental problems, hearing issues, Liver diseases and Cushing’s diseases.

That leads to your taking specific notice to get your puppy from a responsible breeder who breeds puppies under healthy conditions. Also, take care to ask for health checkups and the overall profile of a pup before getting it home.

The stubborn and playful nature of an American Hairless Terrier leads to it most often ignoring the rules. So, this breed would require a lot of positive reinforcement. Though, they are very eager to learn and are agile. That might help you make them learn obedience.

Introduce them to the areas where they can get their digging done as they are very fond of it. They are very adventurous and love to do fun activities with their humans. So if you want to get their cooperation, engage them with some fun training activities.

Their love for digging gets them into digging every time they see a soil patch or a garden or anything that is diggable.

Their prey driven attitude inherited from terriers makes them chasers of small animals.

They love to wander away into the unknown and get lost. They can’t be trusted without a leash when outside.

The absence of hair gets them sunburns. This is a big problem with them.

Like canines are well equipped to deal with different temperatures, they have a natural disadvantage in that field due to the absence of hair.

American Hairless Terriers are very friendly dogs who might make very good companions to you. Some shortcomings are there in every dog breed. If you are ready to take care of them and get past some of their natural disadvantages and look at their natural advantages, nothing would stop you from getting an AHT as a pet. So, go ahead and get your canophilic self an American Hairless Terrier.