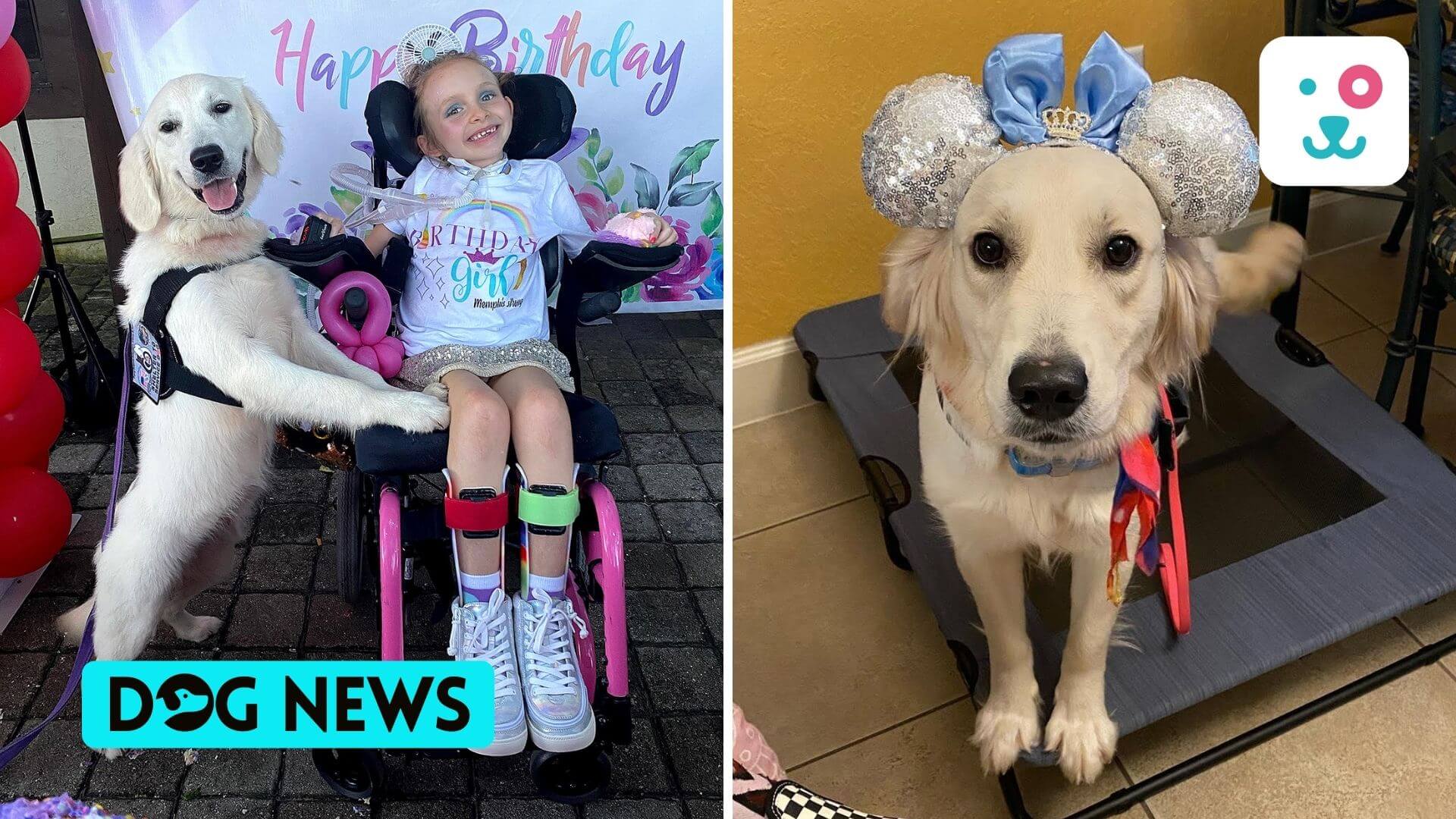 Home » A dog to the rescue of an 8-year-old accidentally paralyzed girl.

A dog to the rescue of an 8-year-old accidentally paralyzed girl.

A two-year-old golden retriever is going to transition from a service dog to a house dog. The retriever named Juliet is moving in with an eight-year-old girl named Memphis Rose Hamman.

Their bond could be seen even though they saw each other. Juliet and Memphis enjoyed the company of each other.

Gayrene Meade, 31, the mother of Memphis told the media that Juliet has been chosen as a service dog for Memphis after training that she completed. Juliet will now live in the house with Memphis.

Actually, Memphis Rose had a car accident in 2020 near Wellington, Florida. That accident made her suffer enormously. Though luckily, Memphis survived that accident but she got a punctured lung, A fractured neck, and a fractured spine. It led to Memphis suffering from a cardiac arrest. Memphis could not move for literally 2 minutes. The doctors even said that Memphis was without breath for almost 2 minutes.

The neurosurgeons reportedly said that the spinal injury of Memphis is so bad that she might not be able to recover from that all her life. She might even catch paralysis later.

During her treatment, Memphis got linked to a dog named Juliet through a local nonprofit that helps children who are dealing with life-threatening diseases. The nonprofit is named Chasin’ A Dream Foundation.

Griffith, from the nonprofit, got to know about the accident and realized Memphis’s love for dogs. He contacted Furry Friends Adoption Clinic in Jupiter.

The furry friends’ adoption told Griffith that they found Juliet exactly on the day of Memphis’s accident from Wyoming sky goldens. The clinic trains its dogs to be service dogs. The clinic and the non-profit decided to train Juliet for Memphis.

Juliet saw each other

‘Once it was decided, Memphis and Juliet saw each other. The pair loved each other and felt a connection. They make a good team,’ said Kourtney Haddix, the owner of Wyoming sky goldens.

Over 18 months of training, Juliet trained every day in Florida to learn the necessary skills to live with Memphis. The funding of $25,000for the training came from the Leeds endowment, a nonprofit in South Florida that helps disabled people in leading healthy and independent life.

Danielle Ford, the co-founder of Leeds said ‘ Memphis is a strong girl, we are happy to help her a little by funding the training of Juliet. Service dogs are amazing in such situations as they have the capability to love unconditionally.’

Though Memphis and Juliet met a few times in between, it is now that they are moving in with each other. Juliet now knows a lot of things that can help Memphis like opening a door, Bringing things, calling the mother, pressure therapy to calm the mind during anxiety, etc.

Though Juliet is there to help Memphis medically, she is also providing emotional support to her, She is giving her unconditional love.

Juliet’s training will still continue with regular training sessions every two months so that she can help Memphis in all the ways she can.

‘Often in accidents like these, all people talk about the physical pain but what troubles more is the mental pain. Juliet is helping Memphis deal with that aspect,’ said the trainer.

Also Read:- A Four Months Pregnant Mother Who Appealed To Find Her French Bulldog Finally Found Her Back.

PrevPreviousA four months pregnant mother who appealed to find her French bulldog finally found her back.
NextA dog in full rage at night-Next