Toxic Food For Dogs- That Can Cause Serious Health Issues. 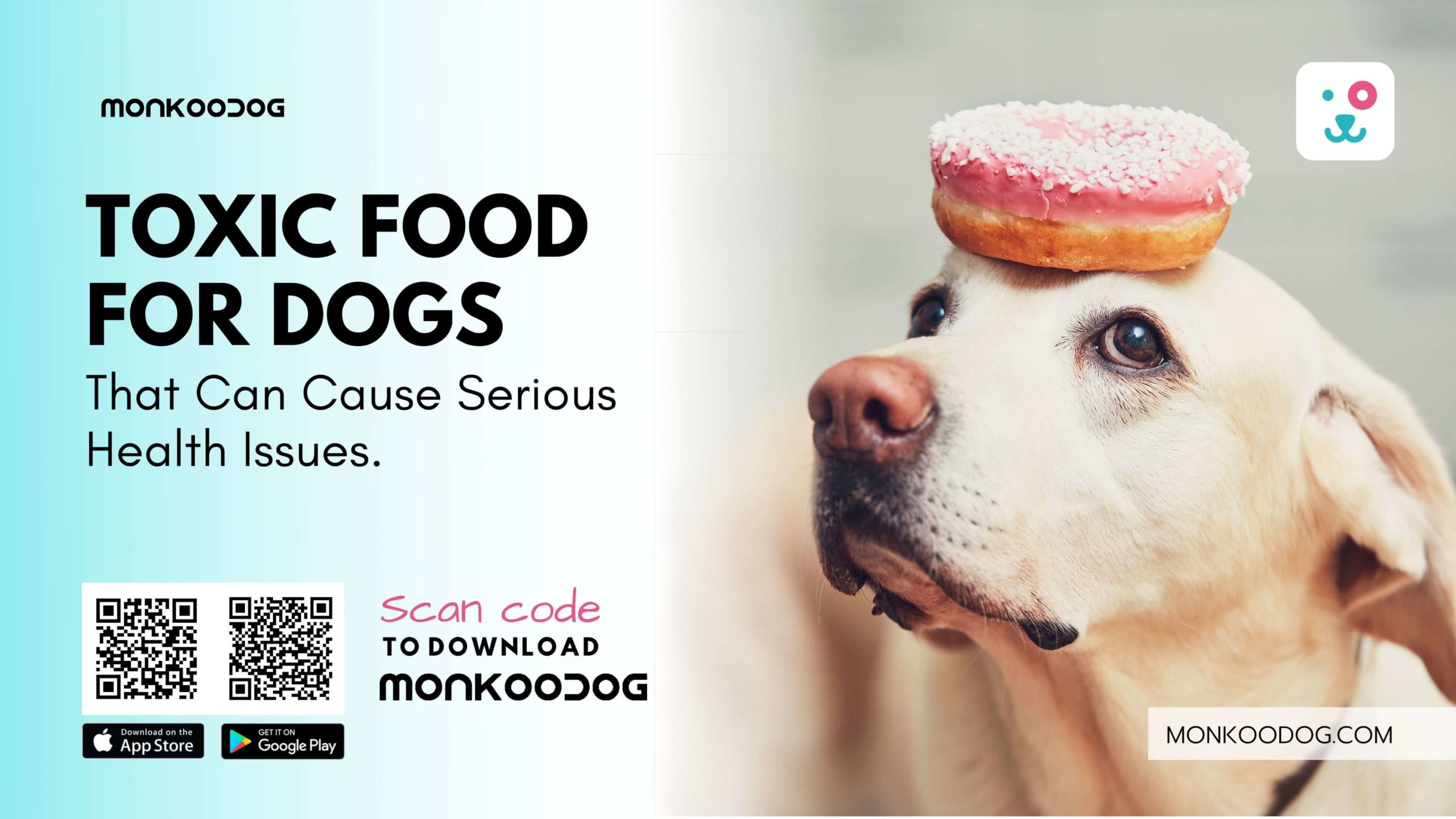 Dogs have demonstrated the capacity to be scared and display fear, to guard the helpless and handicapped, to know right and wrong and show shame, to express gratitude, and to provide emotional support and affection. In this article, we provide all information about Toxic Food for Dogs.

They are amazing creatures. The average dog has the cognitive and emotional capability of a 2-year-old person, making it one of the brightest domesticated animals.

Dogs, as our companions, share our hearts and homes. And we certainly think that there’s no harm in sharing our favorite human delicacies with them, right?

Certainly not. Many things that people usually digest, such as fruits and vegetables, may wreak havoc on a dog’s body, creating serious health concerns. These are likely to be toxic food for dogs.

Some typical foods can be harmful to puppies and dogs, even in little doses. Don’t assume that your dog can eat human food. Because dogs are so much smaller than humans, we can consume items they cannot.

They’re also much lighter, so their body can’t absorb things as rapidly. We humans have distinct digestive and metabolic systems, whereas dogs digest and metabolize their food in different ways.

Dogs have insatiable appetites and do not always know when to stop eating. Although certain foods are not hazardous in small amounts, they can be dangerous in high amounts.

What Food Is Toxic for Dogs?

As a dog owner, you must be vigilant at all times to ensure that your pet is secure and well-cared for. No, you don’t need to be high on coffee and watch their every move; you only need to be extra cautious now and again.

Monkoodog has put on a list of toxic food for dogs for your knowledge and your pet’s safety.

Chocolates have been a celebration in our lives. But for dogs, it is their worst enemy. These are among the most toxic food for dogs.

Chocolates or any substance with caffeine in it should never be given to dogs. WE REPEAT- never, ever! Dark chocolate is the worst, although all chocolate includes theobromine, a caffeine-like substance.

What Happens When a Dog Eats Chocolate?

Chocolate includes methylxanthines, which may be found in cacao seeds, the fruit of the coffee plant, and the extracts of some nuts used in some sodas.

Methylxanthines can induce vomiting, diarrhea, increased thirst and urine in dogs, as well as hyperactivity, irregular heart rhythm, tremors, seizures, and even death.

Almonds and other nuts, such as pecans, and walnuts, have a high oil and fat content.

In dogs, the fats can induce vomiting and diarrhea, as well as pancreatitis.

When chewed properly, these nuts may block the windpipe, which can be fatal.

A handful of grapes can be fatal for your dog. In no condition, a dog should be given grapes. The unknown toxins in the grapes and other grape products such as wines, vinegar, and resins can cause renal failure.

What Happens When a Dog Consumes Alcohol?

Coma and even death can be caused by alcohol and related food items. Alcohol should not be given to pets under any circumstances. These are one of the most fatal and toxic food for dogs.

Avocados contain Pernin, which is toxic to dogs and entirely acceptable for humans. Because pernin is present in avocado fruit, pits, leaves, and bark, you should avoid giving your dog any part of the plant.

What Happens When a Dog Eats an Avocado?

If a dog consumes an avocado, fluid may accumulate in the lungs and chest, making breathing difficult for them, resulting in a lack of oxygen and possibly death.

Fluid can accumulate in the heart, pancreas, and abdomen, leading to additional potentially catastrophic problems.

The Garlic and Leak belong to the allium family of foods, which can be lethal to dogs because of the thiosulfate component that destroys red blood cells. Garlic poisoning needs a lot of garlic ingestion, however, some breeds are susceptible to small amounts.

Sulfoxides and disulfides in onions also harm red blood cells and cause anemia. Any part of these two should be avoided, including the skin, powder, and interior section.

While cinnamon isn’t hazardous to dogs, it’s definitely better to stay away from it. Cinnamon can irritate the interior of a dog’s mouth, causing discomfort and illness.

It can cause blood sugar levels to drop too low, resulting in diarrhea, vomiting, a faster or slower heart rate, and potentially liver illness. If inhaled in powder form, cinnamon can cause difficulties in breathing, coughing, and choking.

Consumption of unbaked bread dough can be toxic for dogs as the yeast is developing in the dough. It creates enough ethanol during the circulation to induce alcohol poisoning. Furthermore, as yeast bread passes through the digestive system, it has the ability to distort the stomach, causing death.

Is Yeast Good for Dogs?

Even if the yeast doesn’t create a life-threatening emergency, it can cause extreme bloating in your dog’s stomach, resulting in excruciating agony and suffering for your pup.

Corns appear to be a nutritious table scrap for your dog, but it does not digest properly in a dog’s stomach, unlike other vegetables. Because of the cob’s size and form, if your dog takes significant parts or even the entire cob, it might create an intestinal obstruction.

Vomiting, a loss of appetite or a reduction in appetite, a lack of feces or diarrhea, and stomach discomfort are all signs to watch for.

The jalapeño pepper is one of the most popular and fiery peppers in the world, and practically every household keeps some jalapenos on hand at all times.

Although jalapenos have no immediate and direct effect on your dog, the long-term consequences might be fatal. The dog may have stomach discomfort, thirst, diarrhea, and bloat after consuming jalapeño.

Xylitol, sugar alcohol, is considered safe for human eating, but it can be fatal to dogs. A fast and heavy reduction in a dog’s blood sugar can result from eating xylitol-containing foods. Within 30 minutes of ingestion, symptoms such as vomiting, weakness, sadness, trouble moving, unconsciousness, and seizures may appear. Xylitol can eventually cause liver damage and death.

Candies, bubble gums, toothpaste, and baked items all contain Xylitol. It is also an essential factor why dogs have different kinds of toothpaste than humans.

Some dogs may be able to manage dairy items like basic yogurt and cheese, but this is not the case for all dogs.

This is due to the fact that dogs lack sufficient lactose enzymes to adequately break down lactose in dairy products. This has an effect on the digestive tract of the dog, causing gas, bloating, stomach discomfort, and diarrhea.

Although humans like rhubarb pies, an antinutrient called oxalic acid in the delicious delicacy can induce renal failure in dogs.

The chemical causes crystals to form in the urinary system and induce kidney failure. Drooling, vomiting, diarrhea, tremors, bloody urine, changes in thirst, and other symptoms are all signs of rhubarb poisoning.

While oranges are generally OK for your dog to consume, citrus oil, which is sometimes used for medical purposes, is not. This is due to the oil’s insecticidal effects, which can induce liver failure in dogs. It would be best if you never massaged it on your dog’s skin medicinally since they are likely to lick it off and keep them from eating it.

Spinach includes a lot of oxalic acids, which are known to cause kidney damage in dogs by interfering with their ability to absorb calcium. Like many of the items on the list, how much you eat has a big impact on how poisonous it is.

A tiny bit of spinach is generally acceptable for your dog now and again, but continuous ingestion might cause major health concerns.

Bacteria such as Salmonella and E. coli may be found in raw meat and raw eggs, which can be toxic to both dogs and people.

Raw eggs include an enzyme called avidin, which reduces biotin absorption and can cause skin and coat issues.

Why Should Bones Not Be Given to Dogs?

Raw bones may appear to be a natural and healthy alternative for your pet if he or she lives in the wild. A domestic dog, on the other hand, might choke on bones or suffer a severe injury if the bone splinters and becomes caught in or punctures your dog’s digestive tract.

Salt in excess can cause increased thirst and urine in dogs, as well as sodium-ion toxicity. Vomiting, diarrhea, depression, tremors, high body temperature, convulsions, etc., are signs that your pet has consumed too much salt.

As a result, It is advised that you don’t give your dogs salty treats like potato chips, pretzels, or salted popcorn.

These nuts are some of the most dangerous meals to give to your dog. Macadamia nuts, which belong to the Proteaceae family, can produce nausea, dizziness, difficulty walking, and lethargy. Worse, they have an effect on the neurological system.

Food contains proteins and lipids that are tailored to a cat’s diet rather than a dog’s. Cat Food has a lot of protein and fat, which is unhealthy for dogs. Overeating cat food can cause stomach distress, obesity, and pancreatitis.

Human snacks are salty and may also contain garlic and onion powder. Raisins, chocolate, and macadamia nuts may also be found in biscuits.

In case your dog ingests anything toxic in large amounts, contact your vet immediately.

What Are the Signs of Food Poisoning in Dogs?

And disorientation are some of the most common signs of food poisoning in dogs.

The best way to avoid food poisoning is to prevent it in the first place. For this, you have to know what is toxic and what is healthy for your dog.

Knowledge is the best weapon against any potential food poisoning through toxic food for dogs.

In the end, there’s a reason dogs get special food and treats developed just for them. Their needs and habits are far different from ours; hence the treatment they get must be different.