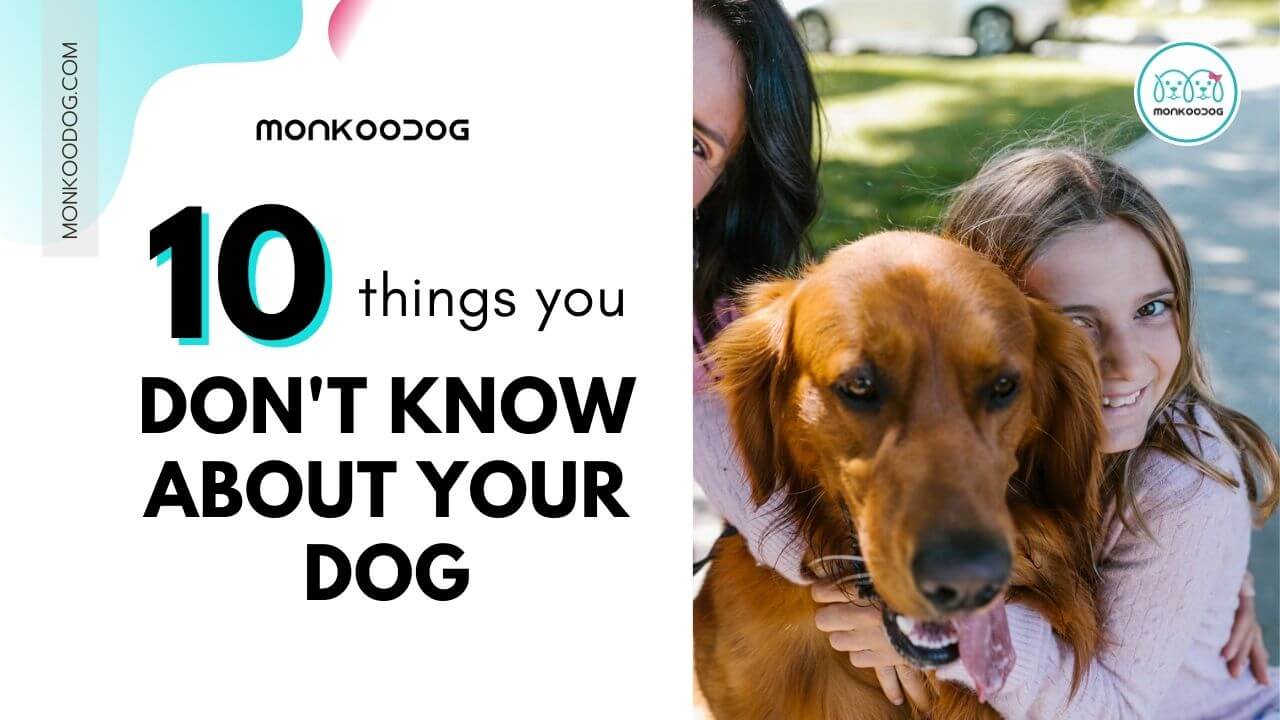 Home » 10 Amazing Things You Don’t Know About Your Dog

10 Amazing Things You Don’t Know About Your Dog

Dogs, simply, are an amazing creation, but there’s a lot of things you don’t know about your dog. Though they are a package of absolute adorability, charm, and amazement, there are certain interesting facts about these four-legged companions that will magnify your amazement.

We have enlisted the top 10 amazing things you should know about your four-legged companions. Read on and dive in for some fun.

What are the things you don’t know about your dog?

A Dog’s sense of smell is far more superior than you think.

While we all are aware that dogs are wonderful sniffers, do you know to what extent? Well, the olfactory centres in a dog’s brain are about 40 times larger than that of humans, and thereby dogs can smell thousand times better than their hoo-mans!

Anatomically, dogs’ nostrils are constructed to allow the odours to linger in their noses as air moves in and out of their lungs simultaneously. This facilitates breathing freely while figuring out what that smell is.

What’s more, dogs can detect smell with each of their nostrils separately. This facilitates pinpointing the direction of smell accurately. Another amazing aspect of a dog’s sense of smell is that it can know what has happened previously.

In addition to processing unique chemical scents around them, they can detect when a car has just driven away or a human has just walked by!

One of the key steps to know what’s going on with your dog – or what they desire – is to listen attentively.

Your pooch’s bark is much more of a hidden language than just a call for attention. In fact, according to studies, there are prominent indicators hidden in the tone and the pitch of your canine’s bark that signifies its feelings.

A single whining yelp, for instance, might indicate that your dog is hungry and wants to eat. In contrast, a persistent high-pitched bark can be an indicator of your dog being thrilled about something like the new toy, food, or simply going out for a walk. However, it can also indicate that your pooch is frightened.

Furthermore, a throaty growl may either be an amusing or aggressive display. Almost all the time, when your pet communicates to you by making sounds, they attempt to convey their feelings to you.

Don’t dismiss all barks as simple requests for attention. Pay attention to your dog’s barking; you would learn something from it.

Some weather myths should be dismissed, such as the claim that lightning never strikes the same spot twice. However, there’s one thing you should never doubt: dogs can detect impending weather conditions.

Although researchers don’t have a definitive answer nevertheless, they do have some theories. According to several studies, dogs are sensitive to barometric pressure dips that occur during severe storms.

Unlike human beings, they are susceptible to low frequencies, such as distant thunder and earthquake rumbles. Though you shouldn’t entirely rely on your pet over the meteorologists, don’t ignore their strange behaviour.

And the top clues?

Food allergies are things you don’t know about your dog and are not that common.

According to the popular narrative spread by pet food companies to make you believe that every dog has an allergy to something, this is just not completely true. Food allergies aren’t as widespread in dogs as you would assume.

And, despite popular belief that “grain-free” food is better for dogs, generally, dogs are more commonly allergic to animal proteins than wheat or grains.

In essence, you don’t have to worry about spending on gluten-free items for your fur buddy, as gluten allergies in dogs are quite rare.

Whether they were wandering the wild, herding sheep, or racing around, dogs, since time immemorial, have always been active creatures. They’ve been active for a long time, which has contributed to their storage of natural energy. However, this energy is wasted when they’re just lying about the house.

Even if a dog can run about in the backyard, walks are still beneficial.

Furthermore, obesity, which is probably one of the most serious health issues in dogs, can easily creep in if the dog’s natural potential energy goes unutilized. The number of dogs affected by obesity has steadily increased due to too many calories and insufficient exercise. Take note, obesity in your dog can lead to several additional health issues and even death. However, this can be kept in check with proper exercise and covering a few paces routinely to stay as healthy as possible.

While we make fun of smelly dog breath, it should not be the norm for your dog. Similar to the buildup in humans, germs buildup can develop bad breath in a dog’s mouth.

In case your dog has foul breath chronically, it can indicate something wrong with their gut or lungs. In this situation, an appointment with your veterinarian for a thorough cleaning is highly recommended.

Remember, Gum disease is a significant cause of bad breath in dogs. Provide your dog with firm, safe toys or rewards that stimulate improved breathing to help nip the problem in the bud.

You can also adopt the practice of brushing your dog’s teeth– if not daily, as routinely, remember to use canine toothpaste.

Try this instead of brushing your dog’s teeth, if your dog is not so cooperative.

According to research from Psychology Today, dogs can not only comprehend but also empathize with your sentiments.

In a scientific investigation on 18 dogs by psychologists from Goldsmiths College in London, it was found that each dog was receptive to the emotional display of the humans involved.

The dogs were made to observe while their owner sat opposite a stranger. The two people were made to speak normally in turns, hum in an odd manner, and act sad. Following this, the pets were observed to:

The psychologists, however, reasoned that the dogs ended up soothing the sobbing strangers as well! All that, even though they had no emotional connection with them, and only because they were unhappy. Therefore indeed, empathy, by default, is a dog’s superpower.

Unlike humans, whose eyes get more adapted the longer they are exposed to darkness, dogs’ eyes are designed to see well in the dark, by default.

The anatomically large pupils in dogs allow in more light, and their eyes’ rods function better in light of low intensity.

The tapetum, which reflects light at the rear of the eye, is the most important component of a canine’s eye. It allows them excellent vision in light about five times dimmer than the amount of light that human beings need to see clearly.

Also See: How To Help A Dog With Anxiety Issues

Humans and dogs are known to look out for each other. However, did you know dogs can detect if you’re 100 percent healthy or not, even before you realize it?

Well, as per studies, dogs have a strong sense of seeing hormones, so they can tell if you’re doing well or not. They can even detect if someone is pregnant. Thanks to their keen sense of smell.

You must have seen and thought that ‘Why do dogs sniff private parts’? Well, dogs can detect volatile organic compounds (VOCs), which include serious diseases like cancer.

In a study done in 2006, trained dogs were able to identify lung cancer and breast cancer with a high percentage of accuracy by smelling breath samples from patients.

Take our word for it: you don’t want to challenge your fur buddy to a race.

On average, canines run at a speed of around 19 miles per hour, although several may exceed 35 mph in brief bursts.

The greyhound, which is designated as the fastest dog breed, can speed up to 45 miles per hour. Furthermore, if all that running gets your fur-buddy heated, do not fret. Because, while a temperature of 102˚F would be considered a severe fever in a human, it is really within the usual range for a dog.

The typical temperature for dogs, according to the AKC, ranges between 99.5 and 102.5 degrees Fahrenheit. It’s not a fever.

If you’re concerned that your dog has a fever, start by inspecting their nose. In case it’s hot and dry outside, it’s a good sign that something isn’t right. If they have:

Also See: How Do I Find A Trustworthy Pet Sitter?

APPSTORE
GOOGLE PLAYSTORE
PrevPreviousTips to Dine out with your dog in Restaurant or Bar Patio this Autumn.
Next10 of the Most Faithful Dog Breeds Who Will Always Be By Your Side.Next